Many business executives conclude: culture trumps strategy. At a minimum, culture is a strong multiplier of business strategy.Here are three ways to improve sales culture: 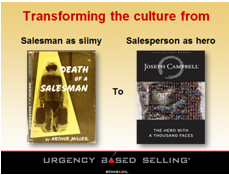 The Theory of the Hero

The salesperson is battling a society-wide pejorative image of all salespeople – as Willy Loman, the slimy loser in Death of a Salesman.What makes this worse is many, if not most, salespeople see their business development work through this prism.

With the society stereotype and the negative self-image of the profession, most salespeople won’t sustain the business development effort.They will avoid the behavior, or burn out.

By contrast, if salespeople see themselves as heroes, this self-image can sustain them for a lifetime of business development.

Joseph Campbell studies hero myths in hundreds of cultures over thousands of years.Campbell discovered these consistent themes in hero myths:

We need to create an environment to support and celebrate the heroic salesperson.

Mini Case History: With a current client, a 25-year veteran salesperson has twice thanked me – after seminars – for my theory of the salesperson as hero. He loves hearing this. He is embracing the program and behaving in radically, more effective different ways.

The Salesperson as the Great Souled Person 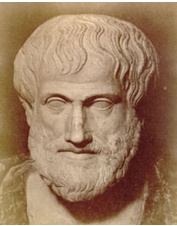 In the Nichomachean Ethics, Aristotle presented the “great souled person” as the epitome of human accomplishment – to be so respected by everyone you command their serious attention when you speak.

A proper selling system promotes the great souled person, by earning the right to this recognition. Sales teams embrace the system, as they want to be respected. It’s a fundamental human need.

I have had many salespeople tell me their favorite part of their selling program is the PIK, the payment in kind – because the prospect is showing respect.

Nietzsche hinted at the method in Twilight of the Idols: “The essential thing about intoxication is the feeling of increased power and plentitude.” 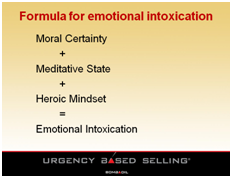 Emotional intoxication has this revolutionary quality – as both means and ends. As an end it can be the ultimate, positive psychological state. As a means it provides the fuel to be self-renewing and generates creative output in productive work (including selling), as well as art.

What if there was a selling system which included all three motivational schemas? There is such a system – Urgency Based Selling®.

On Nov. 7 Andy will be holding a chamber -sponsored seminar entitled, ” Jumpstart

Q4 sales – what can you do to increase sales now?” The seminar is open to chamber members and the general public. Visit www.gatewaychamber.com.

An Introduction to Urgency Based Selling

Urgency Based Selling is a program of Bombadil LLC

All fields must be completed by a C-Suite executive to schedule your free 30-minute phone consultation with Andy Gole. Thanks.

Your salespeople are heroes, they go into harm’s way.  They need body armor – bold visions with visual metaphor, backed up by a powerful proving kit.  They depend on you to supply this armor.  With the proper selling tools, your team will engage your prospects in a serious, committed conversation about why they should buy from you. Show them why your product or service is an urgent priority which will improve their well-being, make their lives easier.

Help your prospects trust your company, overcome their natural risk aversion, and feel confident in their decision.  How?  Strategically offer information and interactions which convince prospects your business delivers exactly what they need, when they need it.

Urgency Based Selling® programs and services give your sales team the tools — the materials and strategies — to develop relationships quickly with prospects, create trust, and overcome obstacles which may slow the sales process.

Develop efficient and effective selling tools with Urgency Based Selling®.

The process practiced by your sales team probably includes thee fatal flaws, which slow down — or even prevent — sales.  There are three parts to the selling process:

In taking the prospect through these segments, we resolve the 3 Fatal Flaws.

Using an engaging and motivational approach, Urgency Based Selling® teaches your sales force a new way to sell, and changes the way they see themselves — and the sales process.  This paradigm shift transforms your sales team — and the results they achieve.

The Urgency Based Selling® system was designed to create a sense of urgency to close the sale. It’s an action-oriented process which generates sales results that motivate your team – and sends your sales numbers soaring.

Start today! Transform your sales people into sales heroes.  Experience the difference of Urgency Based Selling®.

Salespeople are typically most comfortable selling to prospects using a social mindset — that is, developing sales relationships based on how they act with family and friends.  Cordial, friendly, and focused on gaining acceptance.  That approach, though, doesn’t close the deal; it creates social relationships, when we need business relationships.  Successful salespeople operate within a business mindset; it’s a goal-oriented, “do-or-die” mentality which generates urgency in prospects and results in sales for your company.  When it isn’t a one-call close, we measure the strength of the sales call by the strength of the PIK (payment in kind).  What behavior does the prospect demonstrate to show they are serious about our opportunity?  We watch what the prospect does, versus what the prospect says.  Are they a participant or a spectator in the process?

Establish the right kind of sales relationships, those that are strong and controlled by your salespeople. Ensure your prospects are serious about and committed to buying. Urgency Based Selling® sales training changes the way your sales team thinks about selling — and secures sales success.

Revolutionize the mindset of every member of your sales team with Urgency Based Selling®.

Exceptional business development sales results come only from a rigorous, entrepreneurial sales management approach.  The entrepreneurial sales manager coaches salespeople to changed behavior, understands the change process, and supports salespeople through change.  With a focus on profitability, leadership, and motivation, learn how to transform your sales team into top-performing sales heroes.

Sales managers gain an entrepreneurial mindset with Urgency Based Selling® sales management training.  This new mindset transforms your company’s sales culture, with a bold vision for the sales process and bold leadership behavior.  This inspires your sales team to define their own paths to success, and sell with powerful confidence.

Success does not come from “doing your best.”  For your sales team, best efforts means failure.  Developing the opportunity and closing the sale is a moment of do-or-die. Your salesperson must make the deal now, or the sale is gone forever – time kills deals.

Urgency Based Selling® addresses the underlying inhibitions and detrimental behaviors which prevent sales success, and replaces them with bold new values and behaviors, which generate outstanding sales results.

Learn more about Urgency Based Selling®, a different approach to sales training and changed behavior.  Develop a go-getter, entrepreneurial mindset within your sales people-and realize epic sales in record time.